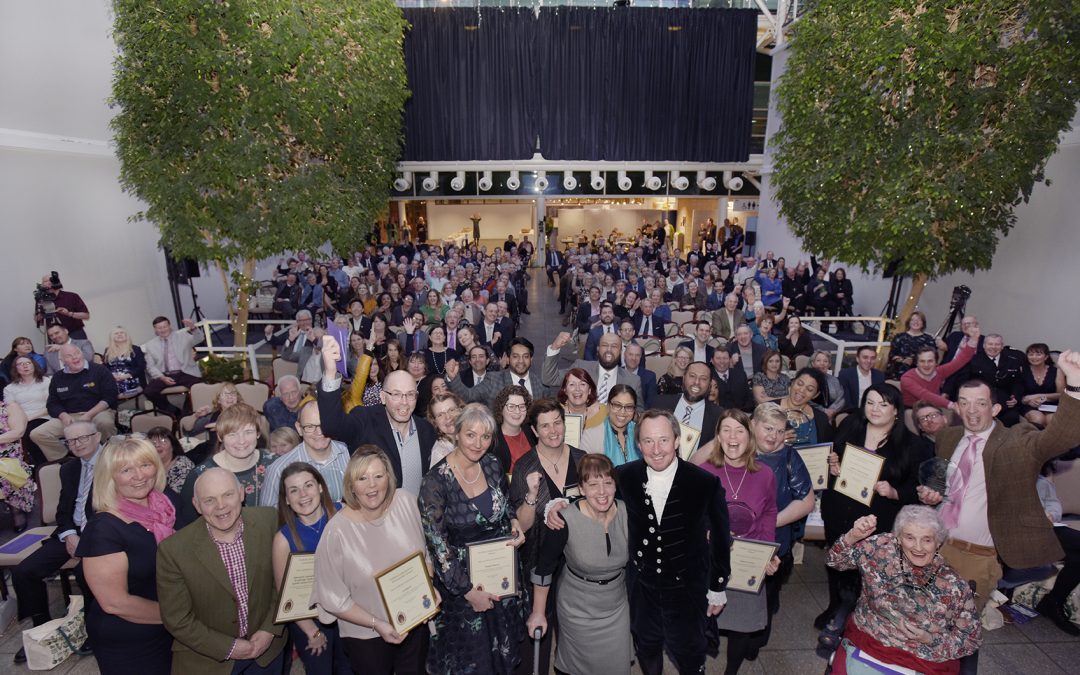 Last night we were joined by charities and community groups from all over Suffolk, along with supporters and sponsors for the High Sheriff’s Awards – a prestigious annual event that publicly recognises these groups, along with individuals (many of whom are volunteers) for their contribution in making Suffolk a safer, better and more inclusive place to live.

In partnership with Suffolk Community Foundation, The High Sheriff, George Vestey, held this year’s High Sheriff’s Awards for Suffolk at Wherstead Park, courtesy of the East of England Cooperative Society.

After a glass of fizz and the chance to catch up over a deliciously gooey brownie or two, guests were ushered to their seats while West Suffolk Youth Jazz played a jazz medley in the background. An excited buzz filled the air as the High Sheriff of Suffolk George Vestey took to the stage to warmly welcome everyone and introduce the hosts for the evening – BBC Radio Suffolk’s Lesley Dolphin and Suffolk Community Foundation’s very own Tim Holder!

Before the awards ceremony could begin, there was some very important news to share. The Suffolk Medal has now been launched, and guests were treated to an exclusive screening of the new film, which explains the reasoning behind this most prestigious award, as well as sharing some charming anecdotes from Maggi Hambling, the renowned Suffolk artist who has designed the medal.

Learn more about The Suffolk Medal.

After listening to George Vestey’s reflections of his year in office, it was time for the awards to begin!

The first award of the evening, Young Volunteer of the Year, was won by Chloe Pearson. Kindly sponsoring this award was Skinners Pet Foods. Managing Director Des Smith presented Chloe with her award. 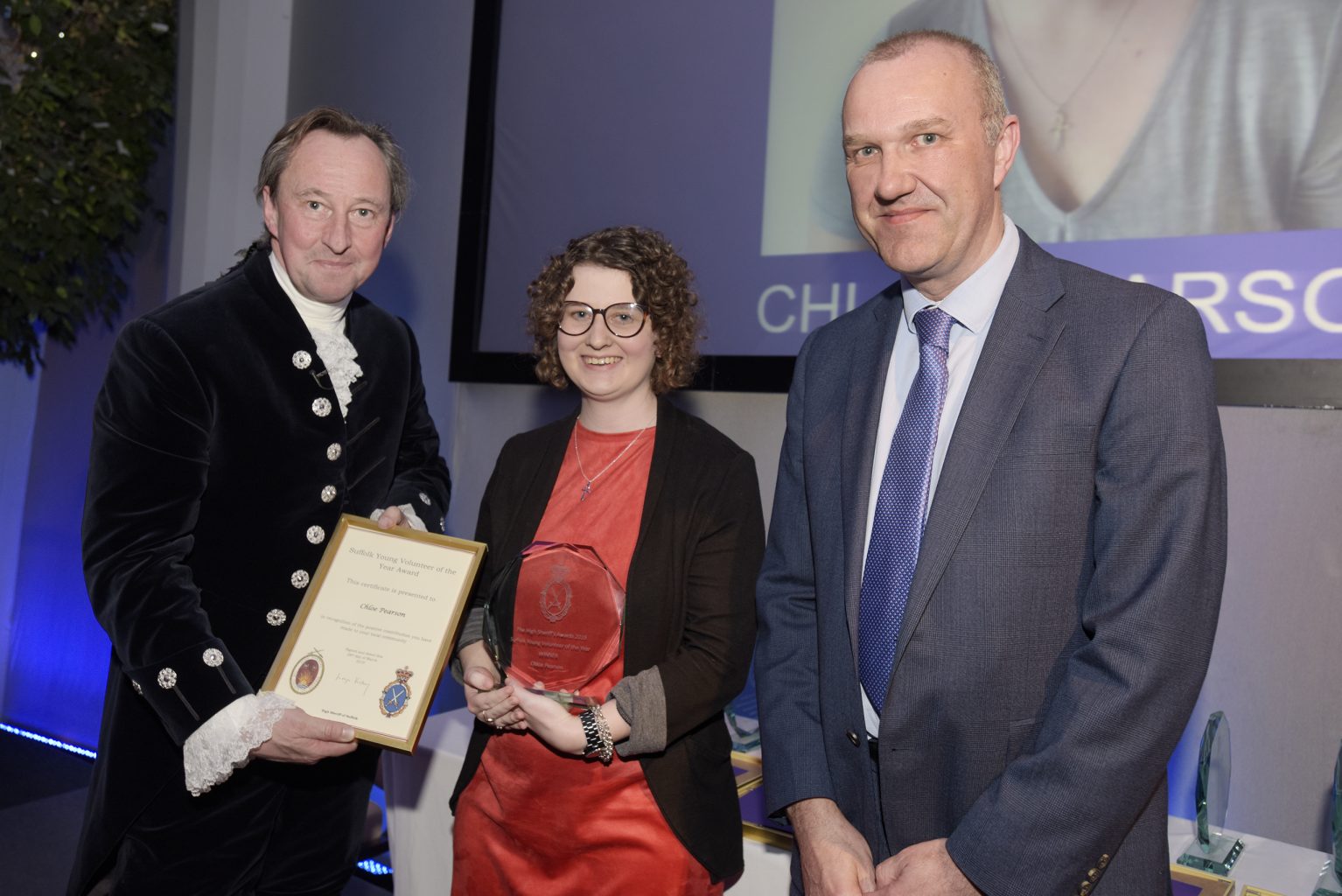 Next up was the Voluntary Health Care Award, won by Livability Icanho. Kindly sponsoring this award was the East Anglian Daily Times, and Editor Brad Jones joined the High Sheriff on stage to present the award. 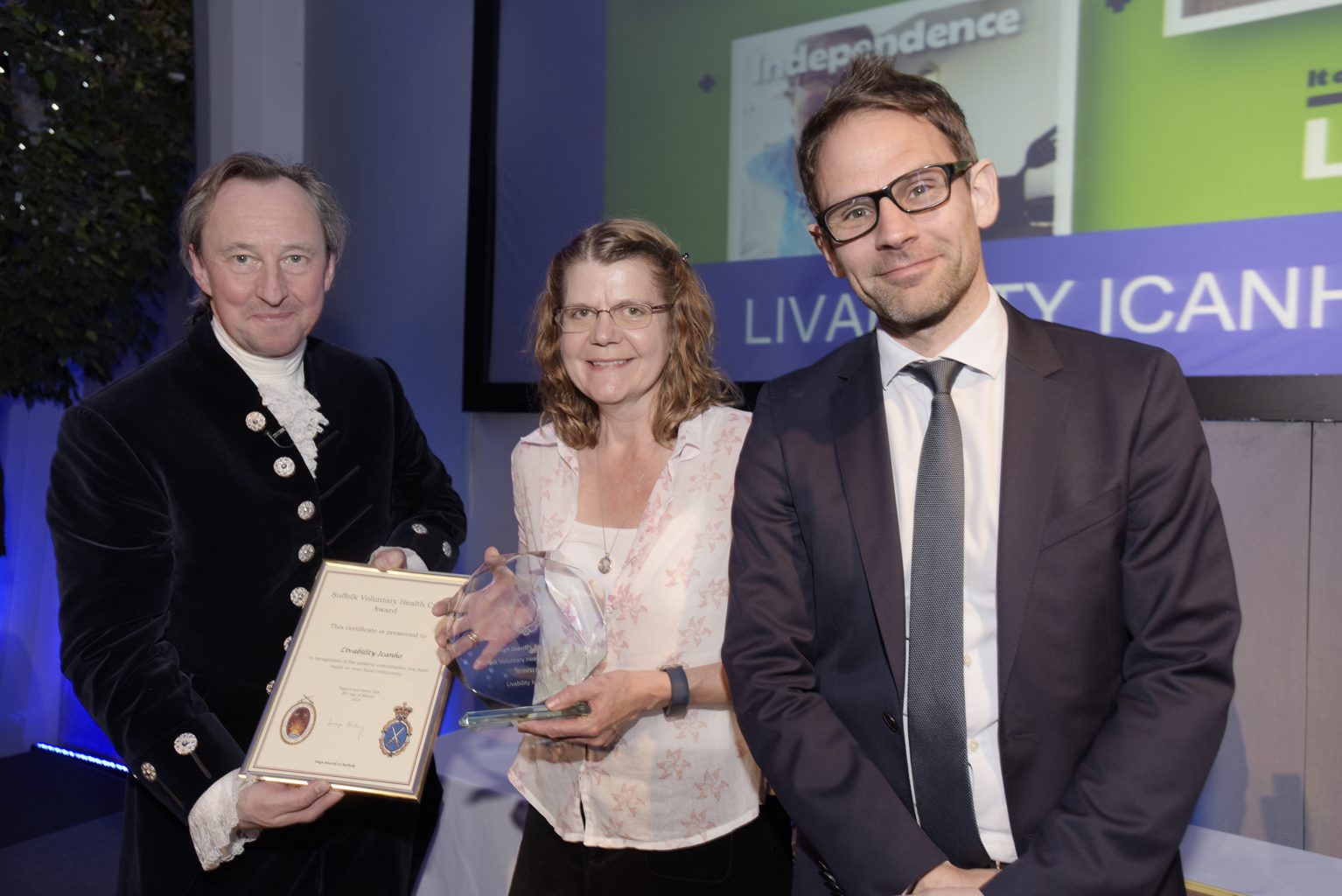 The third award of the night was the Strengthen Your Community Award, won by Operation Camouflage. Kindly sponsoring this award was the East of England Co-operative. Their Head of Communications and Community Oli Watts presented the award. 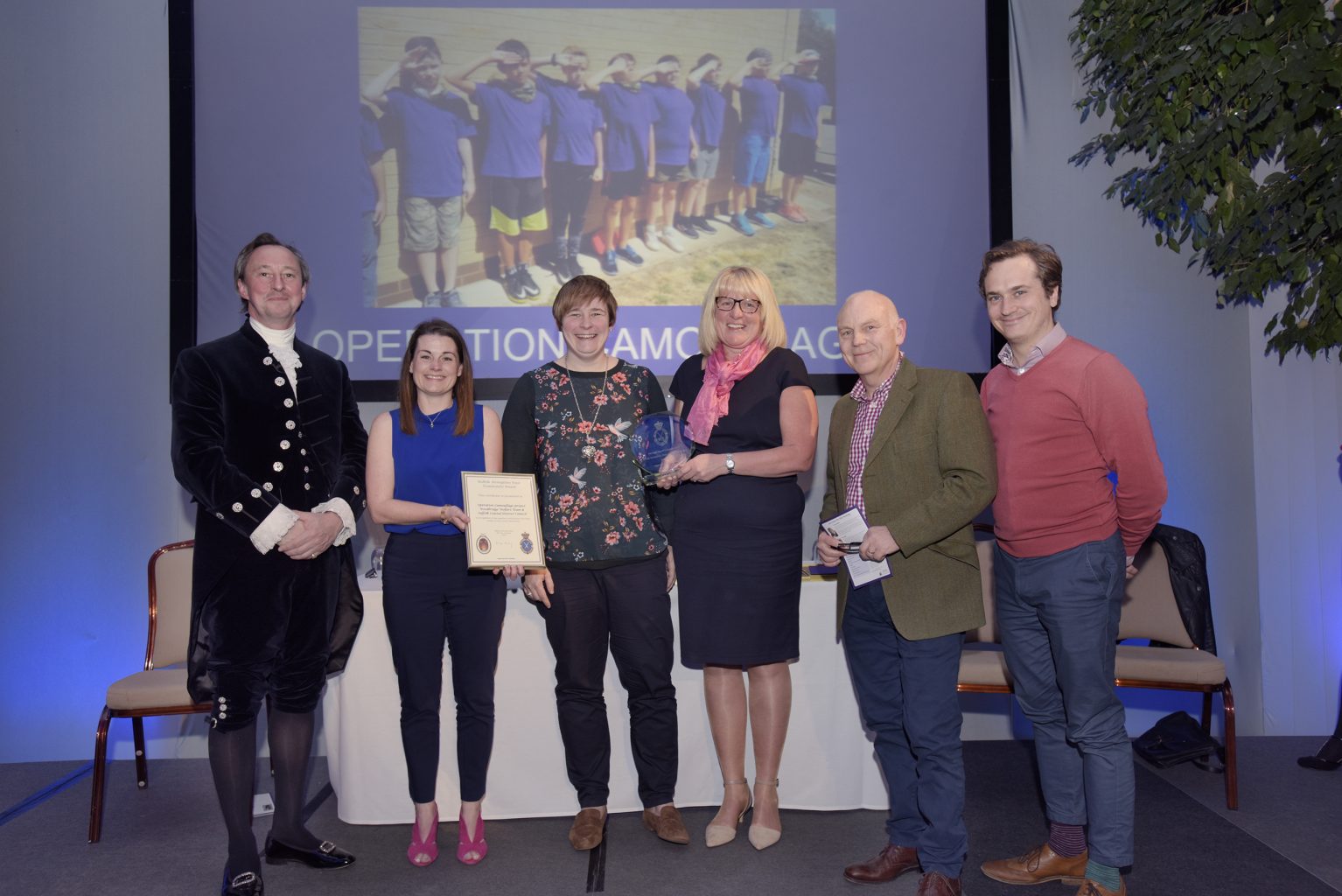 The Collaborative Partnership Award was up next, won by ESNEFT, kindly sponsored by Suffolk Chamber of Commerce. Suffolk Chamber Board Director and Treasurer Matt Moss presented the award.

The fifth award of the evening was the Suffolk Voluntary Organisation of the Year Award – Inspiring Young People, won by The Bangladeshi Support Centre. This award was kindly sponsored by Shout About Suffolk, and Co-Founder Paddy Bishopp joined the High Sheriff on stage to present the award. 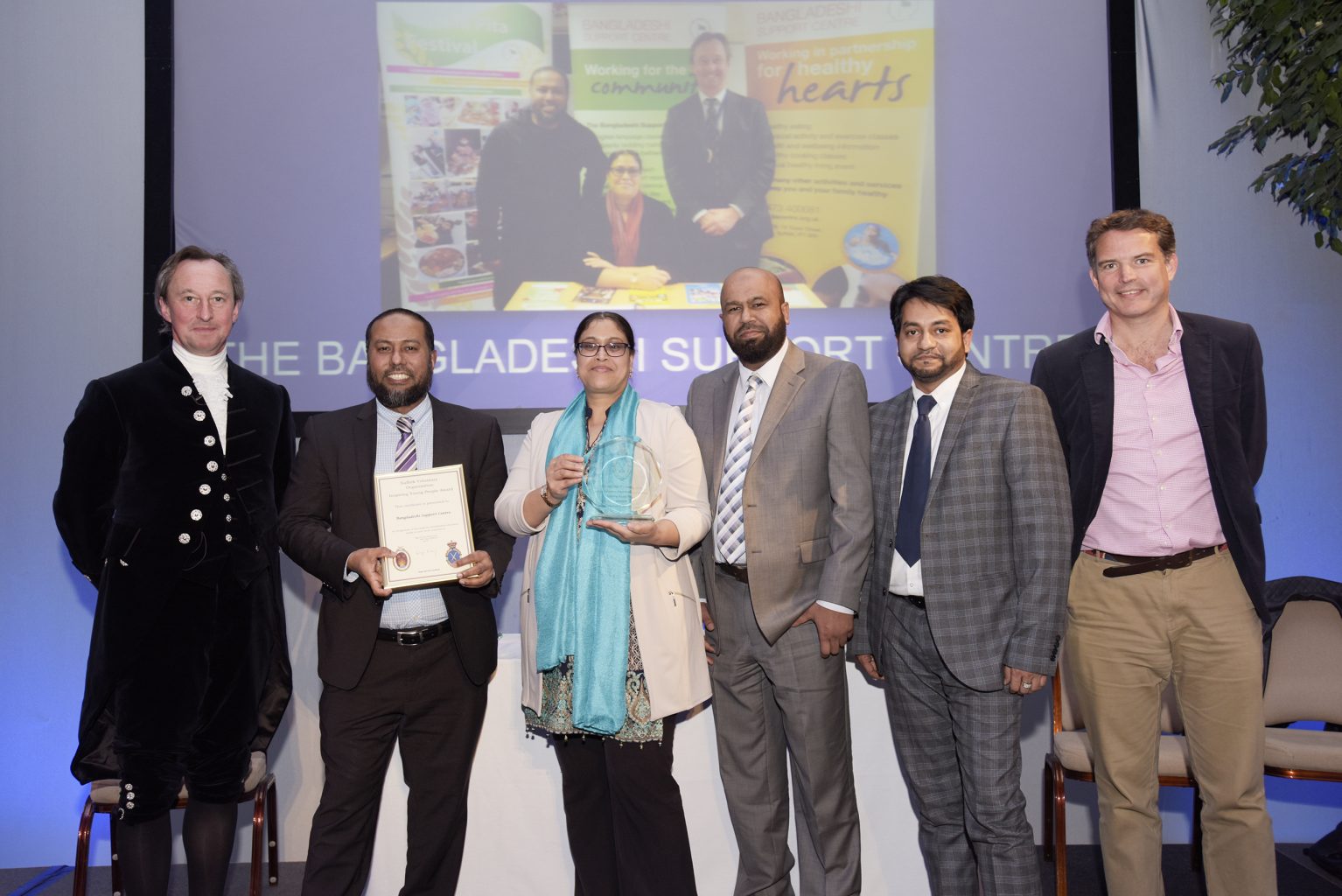 It was then time for a little musical interlude courtesy of the West Suffolk Youth Jazz, who performed ‘Hit The Bricks’ by Gordon Goodwin. With a few solos woven in, there were certainly a few toes tapping!

Next up, the sixth award of the evening, the Volunteer of the Year Award, kindly sponsored by Ipswich Building Society. A strong category with no fewer than 34 nominations!  The winner was Jill Brough, and her award was presented to her by Operations Director Ian Brighton. 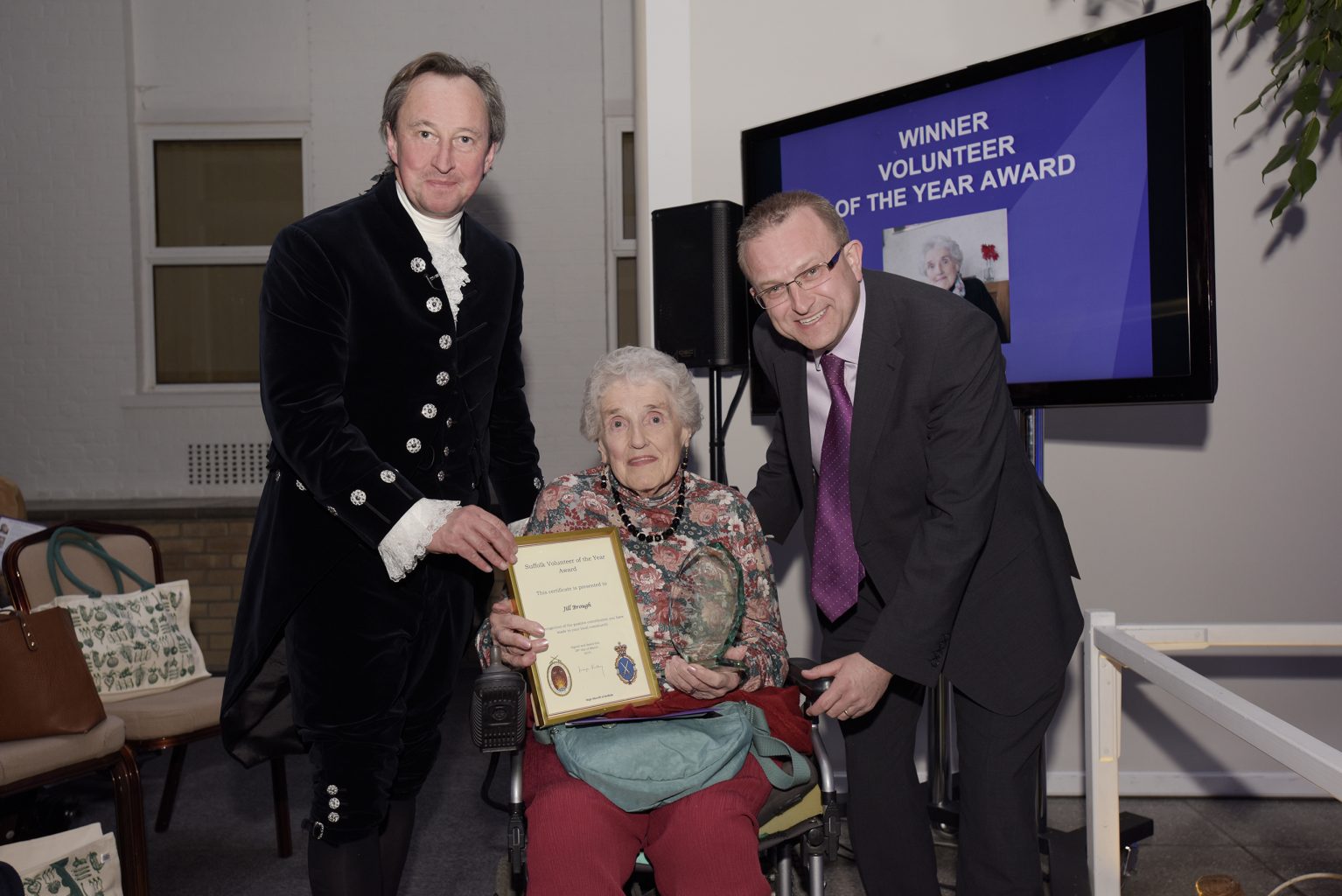 The seventh award of the evening was Voluntary Organisation of the Year Award – Rebuilding Broken Lives, kindly sponsored by Birketts. YMCA Trinity Group were announced as the winners, and Chief Executive Officer of Birketts Jonathan Agar joined the High Sheriff on the stage to present the award. 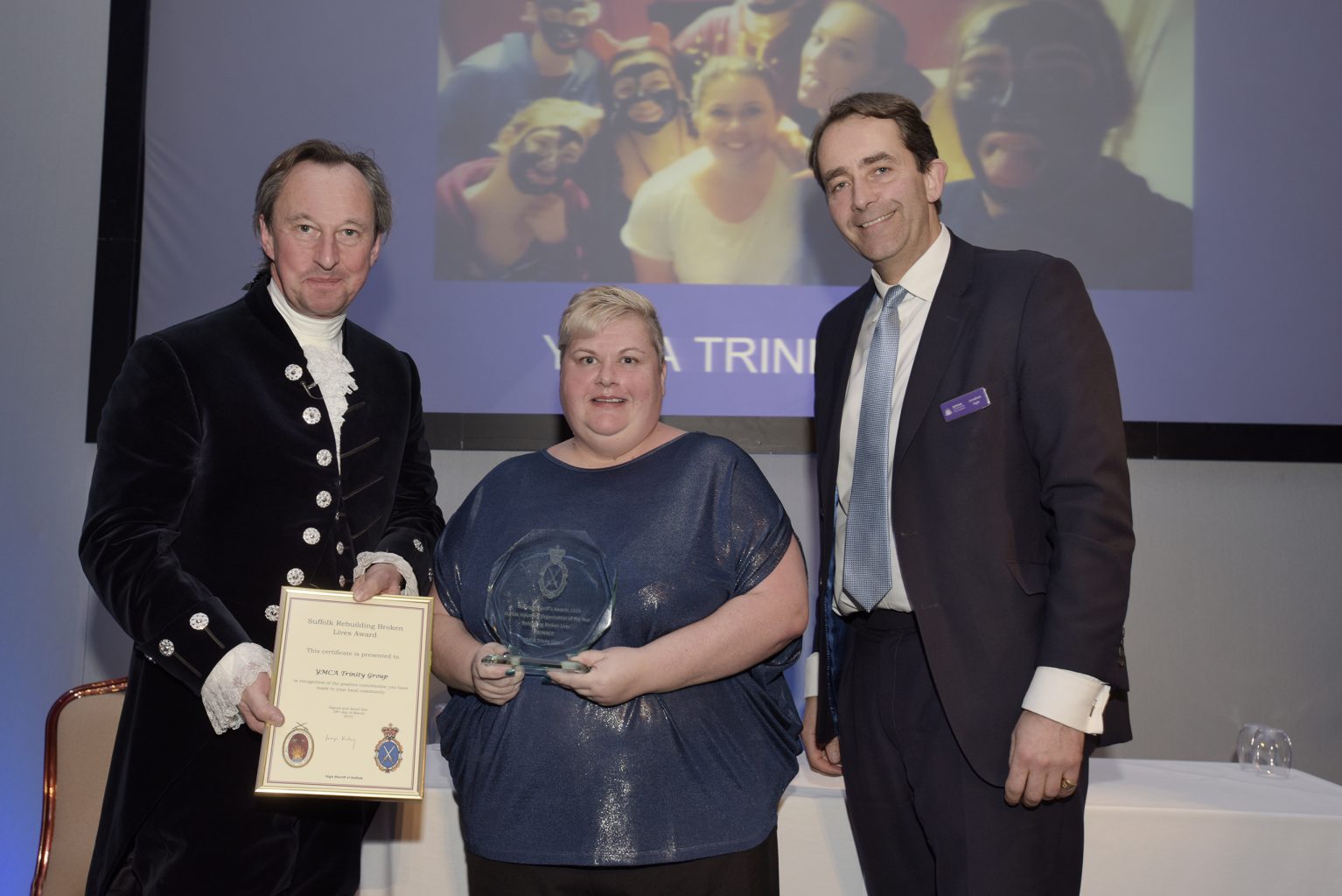 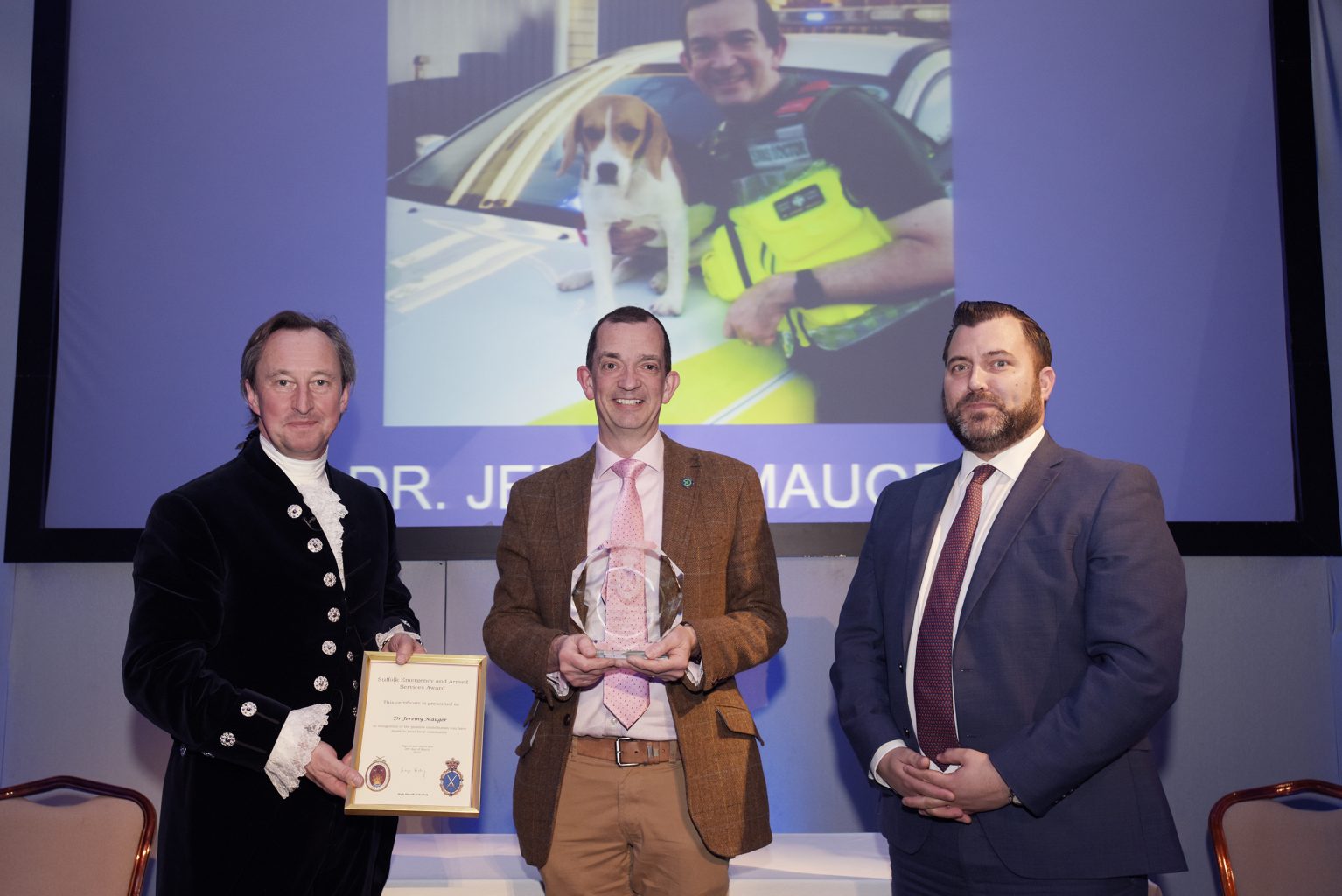 And before we knew it, we were already at the final award of the evening – the Inspiring Leader Award, kindly sponsored by Ashton’s Legal.
An extremely strong category with no less than 28 nominations, our judging panel found it hard to whittle it down to even a shortlist due to the strength of each nomination.

In these challenging times, the strength, creativity and resilience of the leadership of our voluntary sector has never been more crucial. It is they that take ultimate responsibility for supporting and improving the lives not only of vulnerable people in Suffolk, but also their often stretched to the limit teams of staff and volunteers. On top of that, they’re effectively running a business, and responsible for raising all the funds required to protect the excellent work that they do, and to do even more of it.

Which is why the judges felt that all six shortlisted nominees should receive the award. A very special and memorable moment as six women headed to the stage to receive their awards, presented by Head of Commercial Property, James Griffiths. 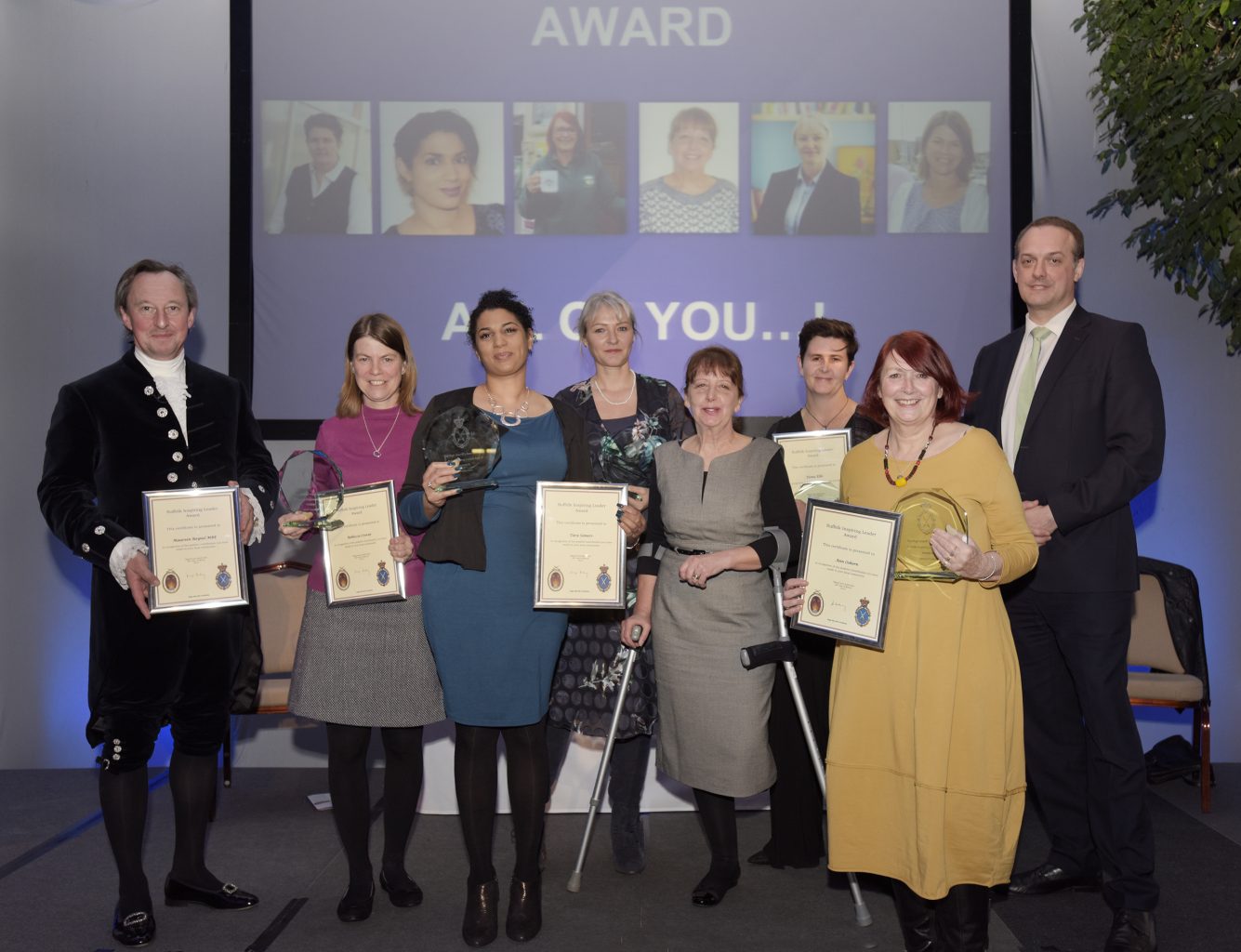 Finally, all winners joined High Sheriff George Vestey for one big selfie – no mean feat given the amount of people on stage but we think it went pretty well!

Chief Executive of Suffolk Community Foundation Stephen Singleton said, ‘Last night was wonderful Suffolk celebration of all the great work that our local charities and community groups do to change local lives. It was particularly great to hear ‘partnerships’ be discussed and rewarded -Team Suffolk working together for the common good.’

Thank you all SO much for coming along to the High Sheriff’s Awards 2019 last night – and a big congratulations once again to all of our winners. We are certainly feeling very humbled, inspired and proud of our county!

Nominations for the 2020 High Sheriff’s Awards will be open later this year. Don’t forget to subscribe to our newsletter to hear about any updates. 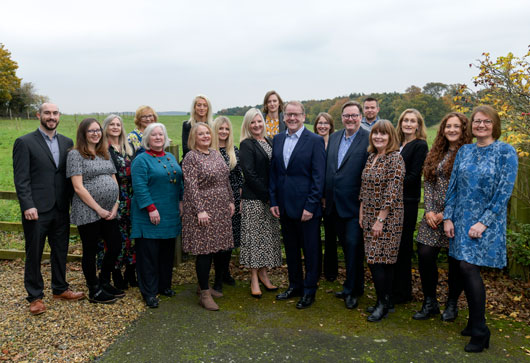